Social media is everywhere – there’s no use in writing a long introduction on how crucial it is in today’s world, seeing as you probably found this post through social media. One industry that it’s changed completely is the modeling world, and it isn’t through a easy ability to post selfies. 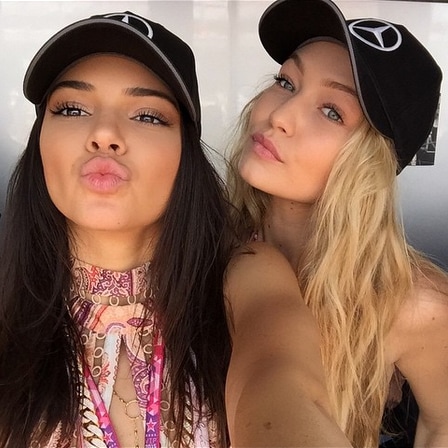 Anytime you logged on in 2015, you were inevitably greeting by the faces of Gigi Hadid and Kendall Jenner – from the Balmain and H&M hype to the duo’s first Victoria Secret fashion show. They’ve been labeled “the new supers” and “it-girls,” while the label “Instagram it-girls” is probably most appropriate – one year on the runway hardly earns you legendary status like Crawford and Campbell. No one batted an eye when Gigi Hadid was named Models.com’s Readers Choice Model of the Year – except maybe a few people (myself being one of them).

Hadid walked in only eight shows during fashion week, while some models such as Alexandra Elizabeth have walked up to 67 shows. Other models, like Rachel Finninger, walked in 26 shows. So how was Hadid labeled the model of the year, when she didn’t even walk a fraction of the shows that other models did? The answer is simple: social media.

Hadid has been praised for her ability to convert from “girl next door” to  “haute couture,” however, this is requirement of modeling; hardly a distinctive feature she has brought to the game. Models are constantly required to match the character they are supposed to be playing, whether it’s a Jeremy Scott Moschino cartoon or an member of the Alexander Wang army.

While Hadid and Jenner are both beautiful and clearly excellent models, most of their success can be attributed to their family connections and massive social followings – not their own modeling prowess.

It’s at least clear that those working in fashion aren’t as caught up in the Hadid-Jenner super storm.

Regardless, shows are still beginning to be cast with social media in mind. Model Rachel Finninger commented that it’s all about branding, “Every model who wants to make it big has to create a brand around themselves. Are you going to be the funny one? The ‘I-don’t-take-myself-too-seriously’ one? … Or the ‘super-skinny-super-foodie’ gal. It’s exhausting trying to find your niche and build a brand around it.”

So what makes a great model now? Social media or personality? Finninger believes it’s a combination of both, “A GREAT model HAS to have personality! And not be afraid of showcasing it – that’s where the social media comes in.”

All articles by: Socialista Management

6 Instagram Metrics To Help You Get More Followers & Engagement